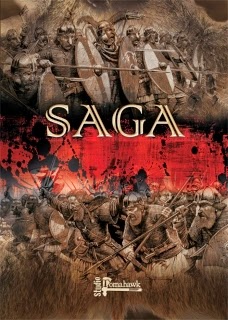 Next to Muskets & Tomahawks my favorite miniature game is SAGA.  Weve been running many SAGA tournaments lately up and down the Mid-Atlantic.  This weekend We ran the SAGA Tournament at Historicon.  We had a fine field of 14 Warlords that wanted to test their mettle on the fields of valor.  Below is a report of their endeavors leading to final victory.....or was it?


Round #1:  We used a modified version of the Battle Twilight Scenario.  I used some of the changes suggested on the Studio Tomahawk forum.  After playing several games with this revised version and seeing 7 games unfold this weekend I have reached two conclusions.  The scenario is much better balanced with the revisions, but it is not a good scenario for tournament play.  It is a bit tweaky and labor intensive to set up.   By tweaky I mean people forget to bring on their endless warband or don't score it right and then see their neighbor score it differently and need help from the judge to get it right.  That having been said, I personally like the scenario and believe that in its revised version it will probably see a lot more play.  This might help it become tournament-worthy over the next year.

Round #1:  Results.  5 Scenario victories and 2 ties.  Slaughter points were kind of low.  I attribute that to the labor intensive set up and the tweaky-ness. 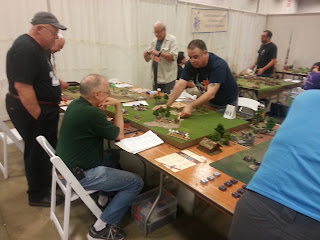 Round #2:  Second scenario was a scenario I developed based on a historical event I read about during the First Crusades at the battle of Dorylaeum (1097).  Titled, "Singulus Iunctus" or "Alone Together", two warlords both seize advantageous terrain and must hold it while trying to dislodge their opponent from his chosen piece of terrain.  I really liked this scenario because it causes both players to be aggressive but they both have to make a judgment call early on as to how much to commit to defense and how much to attack with.  The scenario was well received by all the participants.

Round #2 Results.  5 Scenario victories and 2 ties again.  Slaughter points we up overall reflecting the aggressiveness required by the scenario.


Round #3:  The old favorite with a twist.  Clash of Warlords is what I chose for round 3.  However, I am always amazed when I see people deploy for this scenario and see them place their warlords as far away from each other as possible.  So we made a slight change to this scenario for our tournament.  The player who sets up second MUST deploy their warlord directly opposite their opponents warlord.  This seemed to work well and we had a nice third round.

Round #3 Results:  6 scenario victories and 1 tie.  Slaughter points were also up with victors averaging about 20 slaughter points for this round.  Now that's the way to end a SAGA tournament.

Overall Results:  Jeff Fletcher was the overall winner with his Crusaders the only army to gain three straight Scenario Victories.  Second place went to Christine Argyle and her Vikings who gave her two wins and a tie.  We had a tie for third place with four warlords gaining two wins and a loss.  But Jeff Herzog pulling out the third place based on slaughter points.  His Angl-Saxons accumulated 51 total slaughter points over the three rounds. 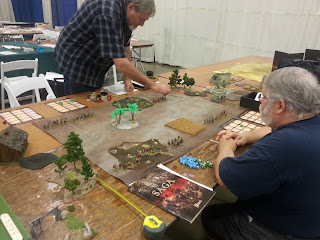 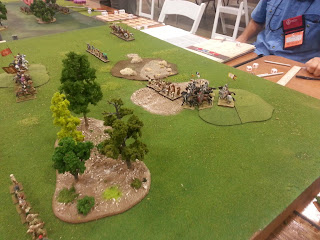 The wrap-up.  Footsore Miniatures handed out the spoils with a 4-point Irish warband going to Jeff for first place.  Many thanks to Footsore for their generosity and support of these events.  It just so happened the US Grand Melee Champion, Jeff Wiltrout, was present at Historicon and he threw down the gauntlet for the victor of the tournament to play in a friendly post tournament game.  Jeff W. rolled out his Skraelings, "for the last time" to face off against Jeff Fletcher's Crusaders.  I am not sure why but Jeff F. decided to mix up his force and instead of fielding his tournament winning Crusader army he rolled out a "Peter the Hermit" version.  So we had Skraelings vs fanatical pilgrims.  In the end the Skraelings came out victorious. 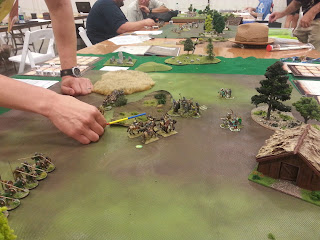 Once again thanks to everyone who turned out to play and I hope to see yo at the next tournament at Fall In.
Posted by Unknown at 9:01 PM