The Dundeen Farm has been captured by the French and those Savage Hurons.  So reported Mrs Dundeen who is convinced thousands of Indians and French have descended upon her Farm.  From the sound of it they intended to stay and in force.  None of the buildings were burned and they seemed particularly keen on insuring the livestock were not lost.  Lt Grosvenor of the Light Company with a few of the trained locals will run a patrol and engage the enemy to gauge his strength (Diced an Engagement Objective).  200 Point French and British forces can be seen in the Army Profile page.

Lt Flambou of the French Canadian Regular Foot Regiment was posted at the Dundeen Farm and directed to hold it and the supplies therewith at all costs.  It was to serve as a supply base for a larger force destined to move up the valley in the next few days.  To assist with holding the important Farmstead he was given command of some Canadian Trackers who knew the area and some Huron Scouts.  (Diced a Defense Objective)


Initial Deployment.  The French Canadians occupied the Farmhouse and the French Line formed up behind it in the field.  The Huron Scouts are in reserve having provided the initial scouting report that the enemy was coming they will arrive later as reserves.  The British Line formed a skirmish line to advance through the forest with the Trained militia coming over the hill at the top of the board.

Lt Flambou's plans.  I want to use the drill and training of my French Regulars to their maximum extent but I do not want to expose them to fire.  I will form up behind the farm house and march them forward to unleash the devastating impact of formed infantry when the time is right.  In the mean time the Canadians can keep the Enemy at bay.  My Indians will be able to move quickly to where they are needed once they come in under the reserve rules of the Defense Objective.


Lt Grosvenor's plans.  My boys will advance quickly through the forest and bring the farmhouse under fire.  Once the Militia moves up in support we will assaut the farmhouse and find the strenght of the enemy.  If possible take the Dendeen farm back from the French and spoil their plans.

Turn #1.  Lt Grosvenor spends all his actions to advance his troops forward.  The Militia gets hung up in the very difficult terrain at the base of the hill.  The Canadians get a few shots from the farm and Lt Flambou marches his line forward and shoots an ineffective volley fire at long range into the British Light Infantry. 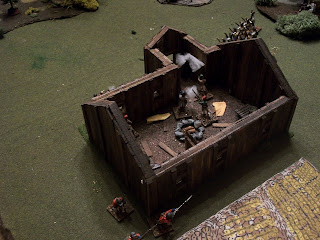 Turn #2 opens with a Provincial double action card.  The move forward and fire on the exposed French line.  One French casualty inflicted.  The British Light Inf charge forward not waiting for the Militia to come on line and using his Forward Boys card Lt Grosvenor directs an assault on the farmhouse.  Meanwhile Lt Flambou spends his actions to march his line forward and around to the front of the Farmhouse trusting that his Indians will return shortly to deal with the pesky Americans hiding in the rocks to his right.   The Canadians suffer one casualty in the melee and the British lose two.  The British take a reaction test and remain huddled outside the farmhouse.  But as none of the models are in contact the melee and the turn come to an end.


Turn #3.  The French reserves (Huron Unit) enter the play and quickly get their action cards to move forward through the woods to oppose the American Militia unit.  Meanwhile Lt Grosvenor finds himself in an precarious position as the Canadian Militia now assault him from the farm while Lt Flambou calmly marches his French Regulars around to the front of the farmhouse.  The British Light Inf lose one Soldier to the Canadian 0 and recoil from the Canadian attack.  Now the French Line moves forward and prepares to Volley fire into the stunned British Lights caught in the open.


Turn #4.  Lt Grosvenor's Forward Boys card comes up and he directs the British to open fire on the French Line.  He inflicts a few casualties which the french have no reaction to being in line and with their officer.  The next card is the French Regular card and Lt Flambou screams FIRE!! at his trained troops and the resulting massed volley devastate the British.  The few remaining British flee only to be cut down by the Canadians in the Farmhouse before they can reach the woods.  Lt Grosvenor is stunned and he watches his command die all around him in front of Dundee farm.  As the French player rolled the dice to end the game at the end of turn 4 we will surmise the Lt Grosvenor is captured by the French.  The American Militia break and run only to be chased down and massacred by the Hurons.  Total victory to the French as Lt Flambou prepares to receive the column marching up the valley.

Recap:  Young Lt Flambou leaned the value and devastating effect of Regulars in Line.  While you can see in the picture above they did end up losing a few more models to the American Militia before the end of turn 4 the Regulars in line are devastating if you can keep them out of direct fire for as long as possible.  He was also very thankful that the Indians quickly moved through the forest and were able to get within musket range of the Militia at the end of turn #3.  Lt Grosvenor learned he should have probably waited for his Militia before he assaulted the farmhouse and maybe even should have positioned himself with the militia to use his forward boys to help them get through the very difficult terrain a little faster.  All in all a very fun and enjoyable game.  Next time maybe I will use the sub-plots to improve the story telling aspect of the battle report.