Had my first real game this weekend and posted it on the Battle report page.  200pt British Light Infantry force with an Engagement Objective against 200pt French Regular Inf with a defend objective.
Posted by Unknown at 7:03 AM No comments:

I posted my British and French Musket and Tomahawks forces in the Army Profiles.
Posted by Unknown at 3:00 PM No comments:

Ok my initial ideas for a linked multi-convention tournament format are posted. These ideas are written for the Muskets and Tomahawks game rules published by Studio Tomahawk.  I bought mine from Architects of War.  Let me know what you think.
Posted by Unknown at 10:13 AM No comments:

Email ThisBlogThis!Share to TwitterShare to FacebookShare to Pinterest
Alright teammates. I am struggling a bit with finding a good "how to guide" for writing good battle reports. Most of what I find out there is for Warhammer. While I do love reading some of their great reports in White Dwarf, they lack some of the historical flavor I am hoping to find here. Any recommendations? Please post in comments or email to me at keegantdad@gmail.com
Posted by Unknown at 10:01 AM No comments:

Alright, my first Blog and first post.  I love wargaming the French and Indian War.  I also love the tournament play found at large historical war game conventions like Historicon and decided to try to bring together other players in order to combine tournament play with creating our own saga of our forces and leaders.  The Tournament page is the introductory version of these ideas and I would like everyone's opinion.  I also want to be able to make this a place to allow us to record our tournament victories, defeats and exploits and create a larger Saga for all of us to enjoy.

TABS
- Home:  will be for an update of the progress of this project
- Tournament Format: The format and rules for running Musket & Tomahawk tournaments.
- Battle Reports for anyone to post either tournaments battles or game reports of any kind.
- Army Profiles:  The record of our armies, their exploits and battle record.  Also a place to promote our leaders and keep a record of their abilities for carry over from one tournament to another.
- Links:  Where I will post helpful links to game products or dealers like Architects of War or histroical information for uniforms like on the Seven Years War Site. 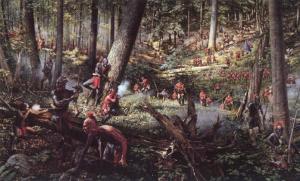