We had 8 players for the Muskets and Tomahawk Themed Tournament at Cold Wars.  I want to thank Loyalhanna Outpost and Architects of War for sponsoring the tournament with prize support.  Please visit their websites linked to their names in the sentence above.

As you can see from the above scores we had a tie for first place between Nick and Jeff C.  The tie breaker was number of points of enemy figures killed or routed from the board during the three rounds of tournament play.  Nick took the final honors having eliminated 254 points of enemy during the three rounds compared to only 154 points for Jeff C.  Congratulations to Nick for taking the individual honors.
Campaign Results.  For those that may not be familiar with the Campaign format of these games please take a look at this Campaign format discussion  French & Indian War Campaign Game Format
Each round of the tournament had an impact on the following round and on the overall Campaign Game.  This tournament reflected the opening year of what would become the French and Indian war and each round was reflective of objectives and sub-plots that would likely characterize the French, British and Indian maneuvers in the Ohio River Valley 1754 on the eve of this great conflict.  The tournament rules can be found here  Ohio River Valley Tournament Rules

Round 2: War Begins – Raid!: Raid Objective vs Defense Objective. French players may choose objective and table edge due to winning the scouting round.  Three French players chose Defense and one chose Raid as their objectives.
French  Points: 14 (a resounding French victory)
British Points:    4

Round 3: It’s time to battle: Engagement vs Engagement.  French are still in the lead for the Campaign and may choose the table edge and whether or not to deploy first or second.
French Points:    3
British Points:  19 (a major British victory)

Here is what the campaign game overall situation looks like leading into the next round.
﻿﻿﻿﻿﻿  The British team came back in the last round with an overwhelming victory that propelled them to 35 points for the tournament.  This meant they not only surpassed the French in victory points for the last round but also for the entire tournament.  So despite narrowly losing the scouting battle in round one and failing to successfully raid the French settlements in round two, the British thoroughly trounced the French in open engagement during round three with three of the four British players meeting their Engagement Victory conditions but also three of the four British players  accomplished their subplot.  This gives the British team an additional 7 victory points for the Ohio River Valley Campaign.  Thus the British lead in Campaign points 42 to 30 in the overall scheme of the campaign.  Next up is 1755  Battle of the Wilderness  225-230 point forces, Traits can be bought using promotion points earned in the Ohio River Valley Campaign (does not count against force point total).  The Wilderness Campaign is worth 10 Campaign Points to the side that is declared the overall victor.  Plan is to play this round of the Campaign during HISTORICON.

Here is a great battle report from Kevin S. and the exploits of Lt Jacques Chiroc.  Lt Chiroc in the Ohio River Valley 1754  Really great Battle Report.  Thanks Kevin.

Some pictures from the tournament. 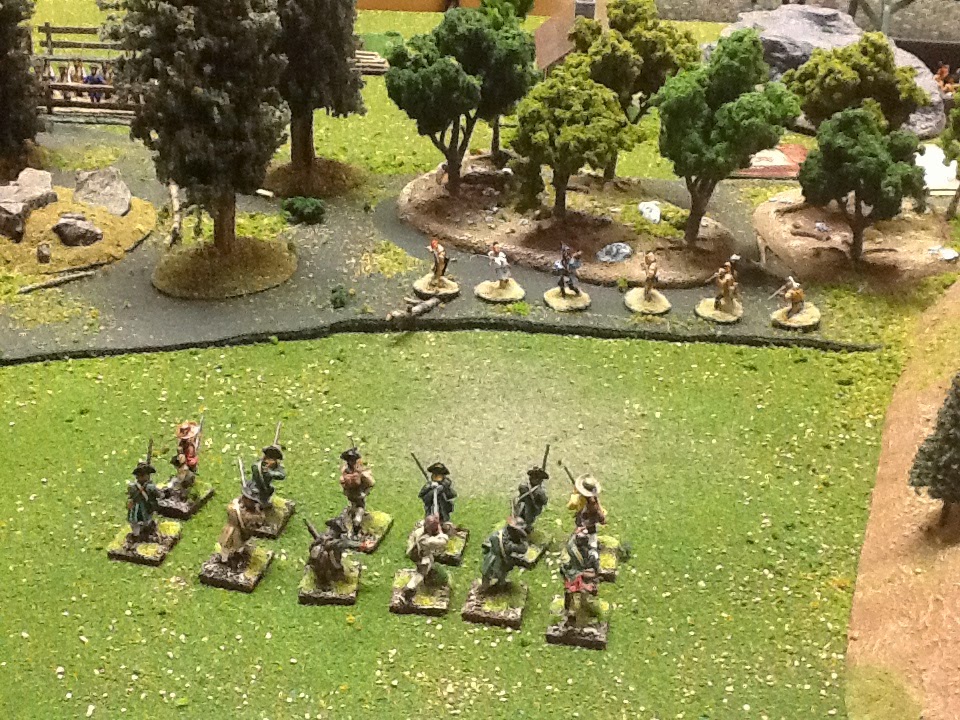 Pennsylvania Militia during round 1 trying to scout the woods are ambushed by an Indian scouting party.  The militia are quickly routed. 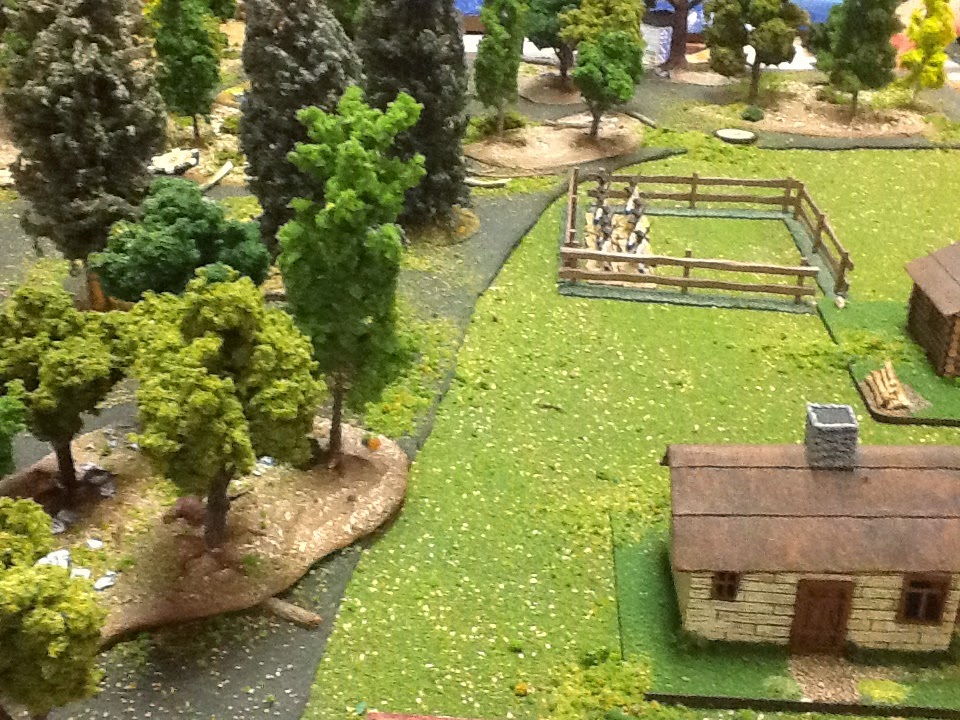 French Regulars surrounded by hidden movement markers during the scouting round. Where is that Chasseur Company when you need it?  Do they hold their ground or take the initiative?  What would you do? 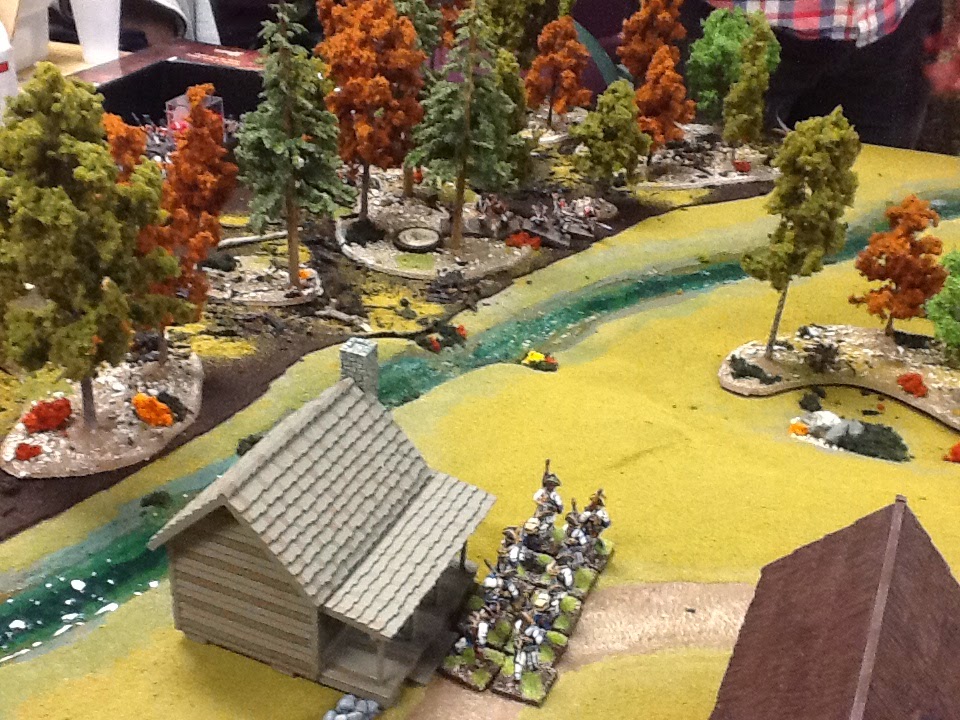 French Provincials move through a settlement as they prepare to defend against the British raid in round 2 on the "Fall Board".  British Light Infantry are about to emerge from the woods on the other side of the stream. 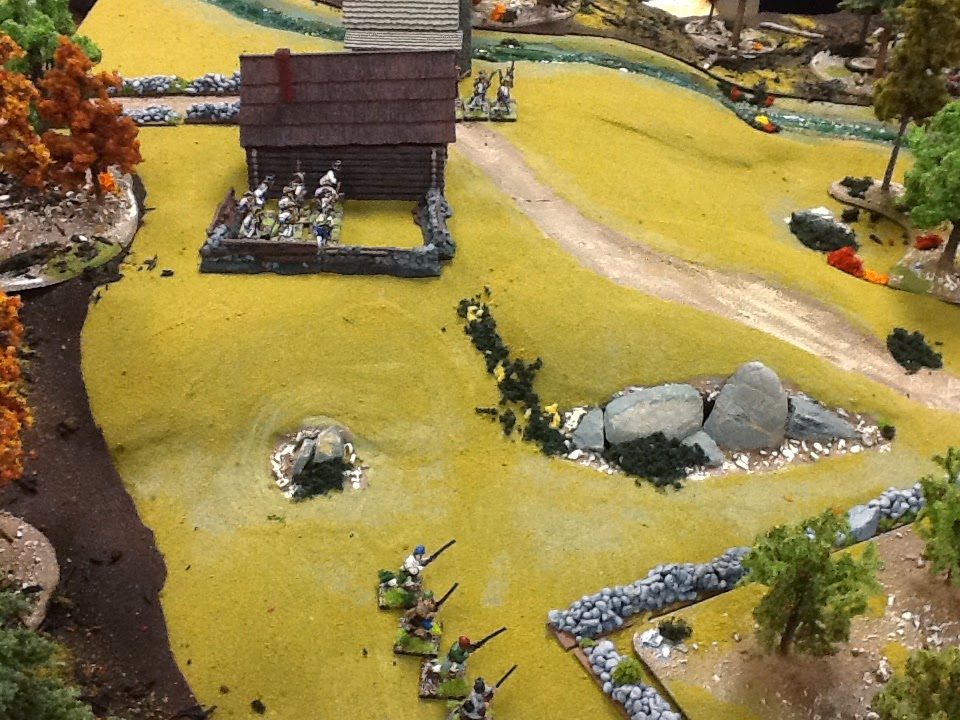 Coureurs des Bois (in the foreground) move towards an orchard to secure the right flank of the provincials as they defend in round two against British Light Infantry Raid. 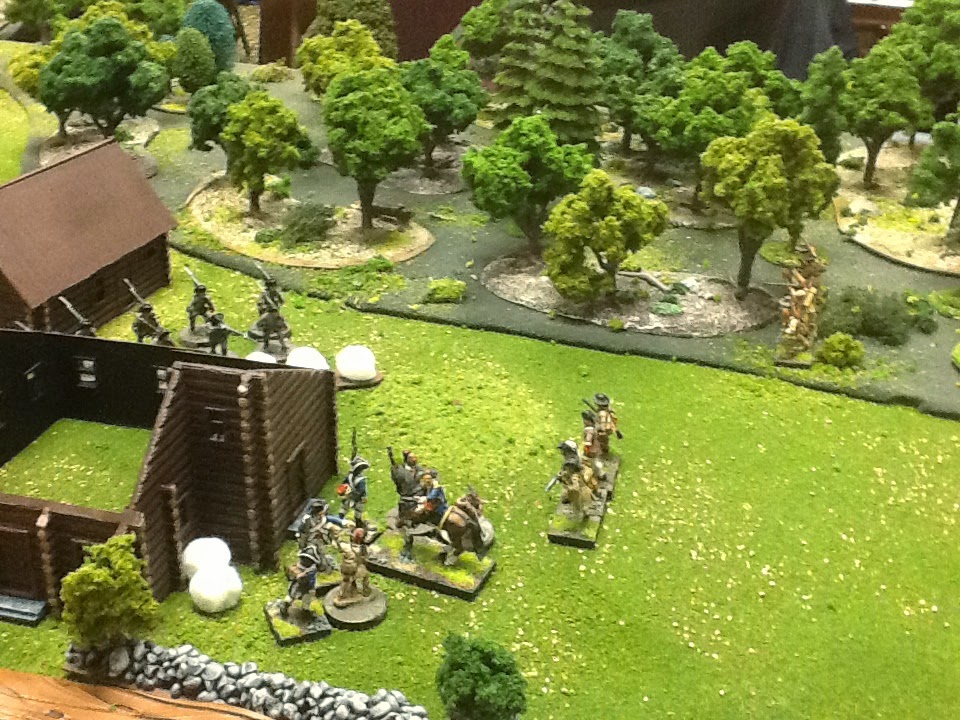 British Militia Raiding party successfully lights a cabin on fire just before they are attacked by an Indian force allied with the French.  Here we see Lt Thomas Weatherby (mounted) trying to rally the militia after taking devastating losses from the Indian Ambush as he brings up a supporting unit of militia. 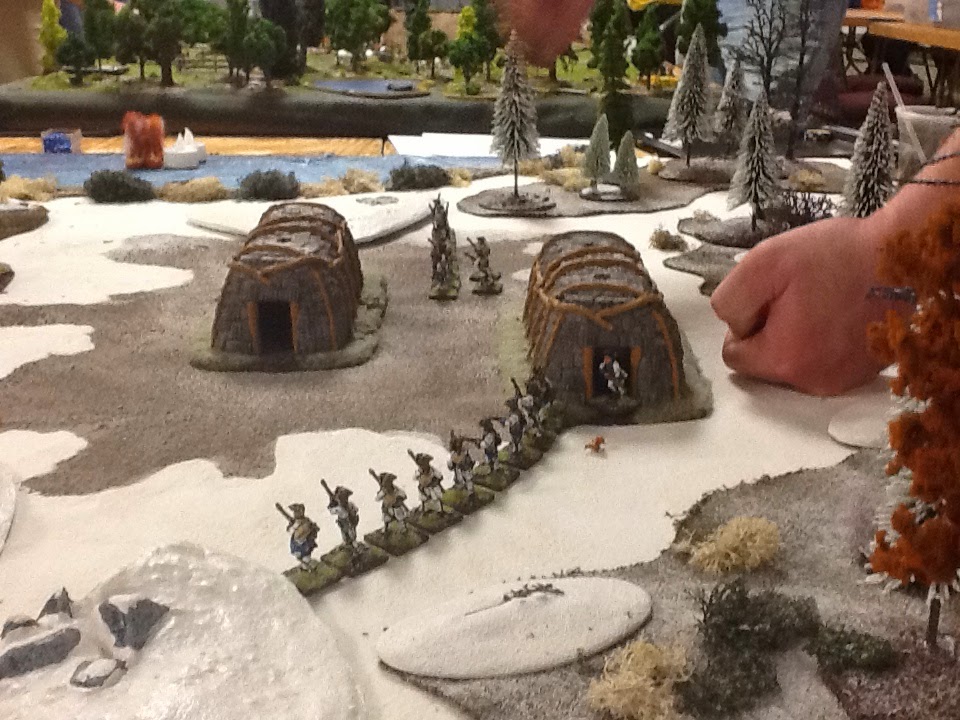 On the Winter board, French Provincials lay in ambush defending the Indian camp as they wait for Jeff C's Indian  raiding party during round 2. 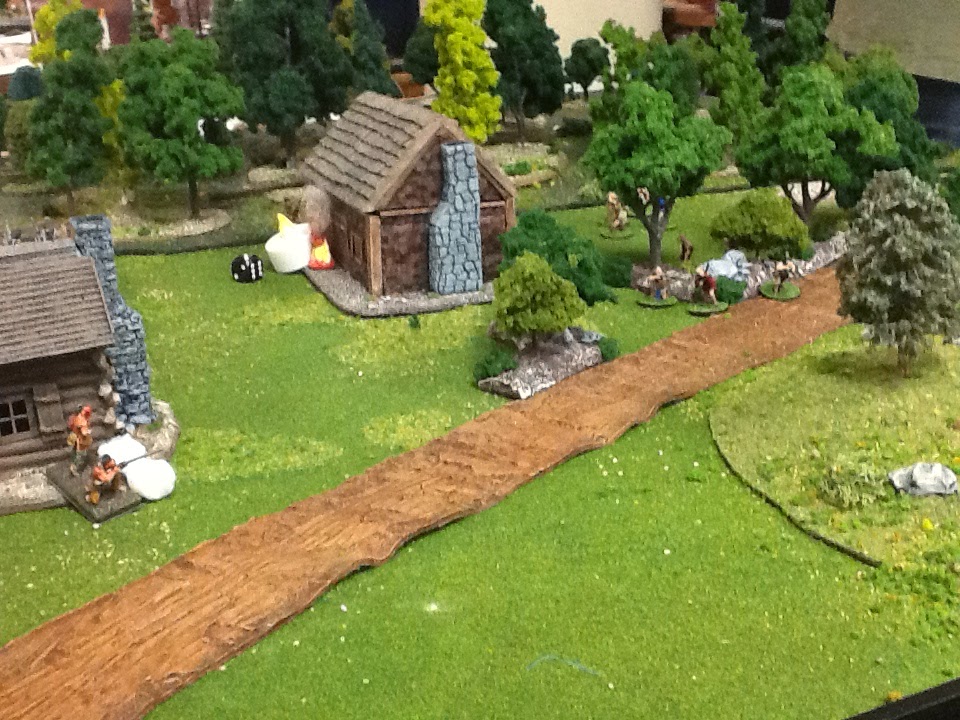 The British had a hard time with the Raid Objective in round two.  There were some successes as seen in the picture above.  Just not enough to make a difference and complete the objective. 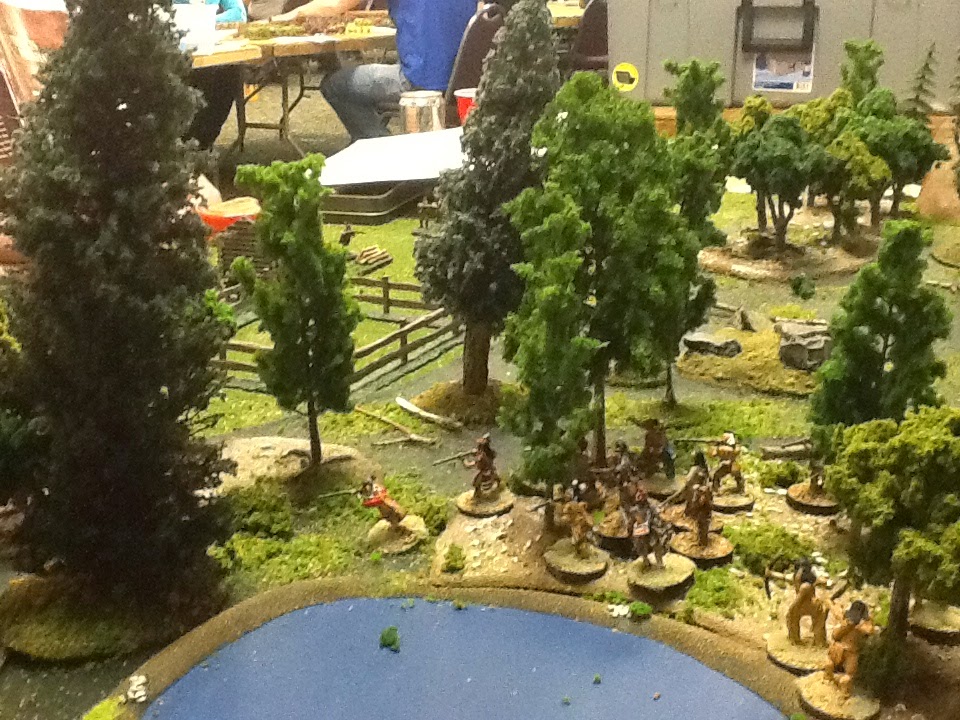 The Engagement vs Engagement in round three caused much action on all four boards.  Here we see some heavy fighting in the densely forested board on one of the Spring/Summer boards.

All in all a great time had by all.  Thanks for everyone who helped set up and tear down.

Here are the last three battle boards for the Muskets and Tomahawks tournament at Cold Wars 14.

Summer #1 has the challenge of a building right on the center point of the board.  This will make this a key terrain feature for all the scenarios but especially for any round with scouting as the objective.  ﻿
﻿
﻿
Summer #2 is similar to Summer #1 with a barn right on the center point of the board.  During play testing, this barn was hotly contested and changed hands several times.  Neither side accomplished their scouting objective.  So perhaps going for the key terrain feature is not the way to go?
Winter board is probably the most open of all the boards.  Buildings again in the center.  Here I am substituting some cardboard inserts for what will be Indian Huts.  The board is narrower than the other boards with the major water feature down one flank.  So maneuver room is limited.

The first ever Muskets and Tomahawks Tournament is now SOLD OUT.  That's right and ten M&T players will be throwing down their forces at Cold Wars this Saturday night from 6pm until we are done.

The Scouts have just returned and below are their sketches of the terrain we will see on Saturday.  These first two boards I laid out today and packed them away for transport.  But I snapped a pic of each.  The next three battle boards will be posted tomorrow.


The Fall board has a lot of open area in the center of the table.  Each side will have to hug the edges to scout all four quadrants without taking excessive casualties.  The side that enters the board nearest the log cabins (from the left of the photo, from the top of the sketch) could  set up a good firing position but then they wouldn't be able to scout and must eventually come down off the hill to get the other three quadrants scouted.


Lots of terrain in the center on Summer #3.  The  terrain pretty much drives everyone towards the center of the board.  The battle on this board promises to be quick and bloody.

As a reminder.  We are going three rounds.

Each round represents a stage of the Ohio River Valley Campaign:
Round 1: Testing the waters: Scouting Objective vs Scouting Objective.
Round 2: War Begins – Raid!: Raid Objective vs Defense Objective. If one player accomplished his scouting objective in round 1 he may select which objective he wants in round 2. If not roll a die and high score choses.
Round 3: It’s time to battle: Engagement vs Engagement (or scouting vs engagement if one side is Indians, Irregular or Militia who must scout vs engage for this round).

So check out the terrain and plan your moves ahead of time.  It promises to be bloody and brisk.
Posted by Unknown at 2:34 PM No comments: