It was a beautiful late Summer day in Western Pennsylvania and I had a few hours to kill so I decided to stop at Fort Bedford in Bedford Pa.  Here are a few pictures for you to enjoy.

Fort Bedford Location lies East of Fort Necessity and Southeast of Fort Pitt.  In the lower right of this map. 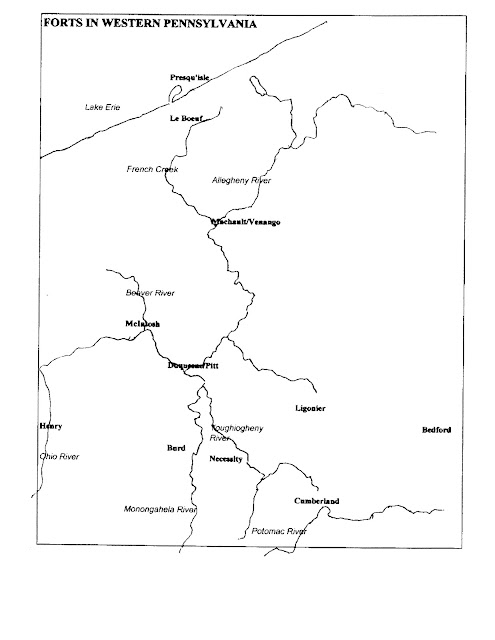 Fort Bedford was a British Stockade built in 1758 as part of the  campaign against the French at Fort Duquesne. After several failed attempts in the early 1750's, the British launched a major offensive against Fort Duquesne in 1758. Facing the formidable task of crossing the Allegheny Mountains and the threat of attack, numerous stockades were built along the trek west. Fort Bedford was constructed as a key fortification along the military path, Forbes Road, and served as the staging area for the successful campaign. After the war, Fort Bedford was used as a British outpost on the frontier as refuge from Indian attack as the exploration westward increased. The stockade stood strong until the 1770's. 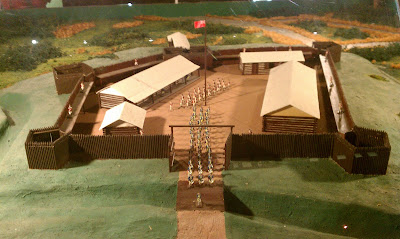 The reproduction on the current location only replicates a small corner of the original layout>  The town of Bedford PA has been built on the location previously occupied by the fort.

The stockade, known as Raystown and later named Fort Bedford, had been built by Forbes' capable deputy, Col. Henry Bouquet. Bouquet constructed one of the best of the frontier forts at Bedford. Embracing an area of 7000 square yards, the fort had five bastions, places for the use of swivel guns, which guarded the corners of the irregularly shaped stockade (see image, below). The main gate was on the south side of the fort parallel to modern-day Pitt Street, a smaller gate faced the west side and a postern gate opened northward.

It is interesting to note that several articles I read on the fort indicated that there was no artillery present.  Yet in the Museum they show several shells and from the archaeological finds in the area it appears that they had discovered they believe there had been an "artillery park" at one time where they found a concentration of unused shells and some artillery tools and they found a concentration of obviously spent/used shells about 200 Meters from the proposed "park" .  Target practice or crew drills perhaps being the cause of the spent shells as there is no reported battle at Fort Bedford.

The small city of Bedford is interesting and the surrounding countryside was beautiful.  Nearby there is an "old Bedford Town" which replicates what the town might have looked like in the 18th century.  It is apparently frequently used by reenactors.
Posted by Unknown at 11:40 PM 2 comments:

Some of the wargamming figure manufacturers are starting to make some great sets that would make great 200 point starter sets.

And North Star has a British and Woodland Indian starter army with French on the way.

Not exactly a battle report, but the saga of Merfyn Frych, Welsh Warlord, as he contends with 9 other warlords for the Kingdom of Mercia at the Battle of Williamsburg Plain.  SAGA Tourney at the Guns of August game convention in Williamsburg Va.  The full write up with pics is on my SAGA page or go here.

Two Muskets and Tomahawk Games at Guns of August

There were two M&T games played at the Guns of August convention in Williamsburg Va this weekend.  I missed both but got pictures of one of them.

Game #1 Friday Night:  Here are some pictures of the Friday night game.  I missed it.  Dang the DC traffic.  Was American War for Independence and not FIW.  The Colonials are in and around the tavern in the upper left The British Hessian unit is marching down the road.  Believe the Colonial Objective was Protection with the civilians in the building. 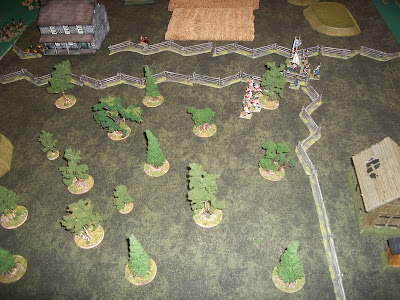 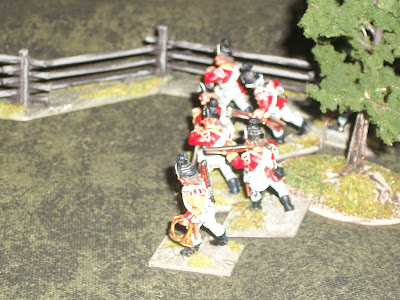 British Light Infantry moving across the lightly wooded area in support of the Hessians. 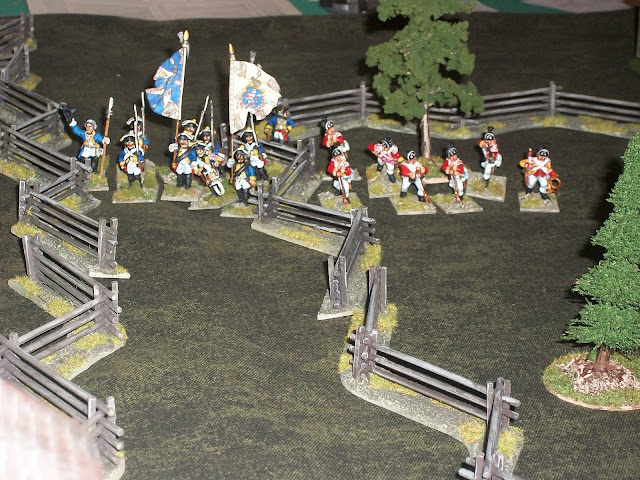 The British steadily advanced but failed to inflict any serious casualties on the Americans.  The American Commander was killed but the civilians were saved.  Victory to the Americans.

I posted a build log and review of the Pegasus 1/72nd buildings on the review page.  I put these together for my French and Indian Wargaming table.  I was getting tired of using my SAGA dark age buildings for the French and Indian games and found these Pegasus Russian houses to be inexpensive and bought a set to try.  I found the models very easy to assemble and the look fantastic.  You get two structures in one box.  They are true 1/72 scale and do well with 25mm.  You can probably get away with them for 28mm as long as you are not to much a stickler for scale.  Enjoy the build log. 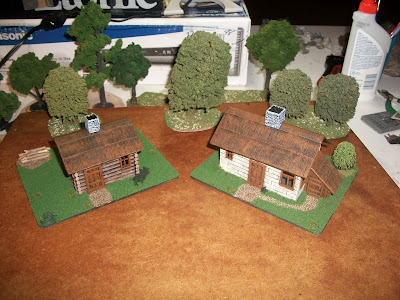