Alright French and Indian War game fans. I have taken the plunge and volunteered to run the first ever Muskets and Tomahawks tournament. I do hope this is the first of many. The venue is the HMGS Cold Wars Convention in Lancaster PA. Here is the link http://www.coldwars.org/ 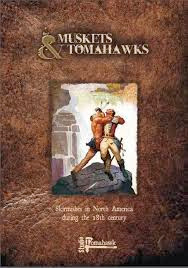 I was asked by a couple of M&T players to run a tournament on Saturday of Cold Wars. The plan is to keep it simple but I am going to use my themed tournament idea and given that it is the first and we are keeping the point totals at 200 points I am making this the "Ohio River Valley" themed tournament. I am busily making terrain and hope to have boards as nice as the one pictured below.
﻿ My goal is to make this a beautiful display event as well as an inviting chance for new players to jump in and play a round or two. I will have plenty of loaner armies available and I will run demo games to teach people how to play. Loyalhanna Outpost http://loyalhannaoutpost.com/ has been nice enough to provide some packs of unpainted Galloping Major Indians as prize support.

Finally. Here is the draft of the tournament themed rules. Your comments and advice are greatly appreciated.

Army Limitations: 200-210 points from any list in the M&T rule book, no traits or artillery or cavalry. Table size & Scenery: 4x4 tables each with 2 buildings. Lots of woods and possibly a stream or river. No straight line exceeding 24 inches without running into terrain.

Victory Conditions and tournament scoring. Victory points are based on accomplishing Objectives and sub-plots. Total your points from the below list. Between 0 and 6 points are possible for each round. Accomplish your scenario objective = 3 points Accomplish your sub- Plot = 2 points Opponent does not accomplish his objective = 1 point Tie breaker will be number of points of enemy figures killed by each side.

Scenario objectives and plot background: The French and Indian War began after a series of incidents in the upper Ohio River valley, which the French and British governments both claimed as their territory. Military forces assembled by both imperial powers built and attempted to capture each other’s forts in the region. These expeditions and skirmishes ultimately led to the escalation of a wider, full-scale war between Great Britain and France. While French and British officials maneuvered military forces about, they also attempted to curry favor with American Indians living in the region. Both sides had Indian allies. However, many Indians in the upper Ohio Valley were concerned about colonists encroaching upon their land, and did not acknowledge British or French authority. This tournament reflects the characteristics of this campaign.

Each round represents a stage of the Ohio River Valley Campaign:
Round 1: Testing the waters: Scouting Objective vs Scouting Objective.
Round 2: War Begins – Raid!: Raid Objective vs Defense Objective. If one player accomplished his scouting objective in round 1 he may select which objective he wants in round 2. If not roll a die and high score choses.
Round 3: It’s time to battle: Engagement vs Engagement (or scouting vs engagement if one side is Indians, Irregular or Militia who must scout vs engage for this round).

Sub-plots: For each round, each side rolls a D6 to determine which sub-plot they have from the list below.
1-"Negotiations"
2-"I'll prove my worth"
3-"Emotive"
4-"Boldness"
5-"Authority"
6-"Truce"

The ideas behind the themed tournament concept can be found on the Tournament Tab here on this Blog.  Your thoughts and ideas for these concepts are also much welcomed.
Posted by Unknown at 7:18 PM 10 comments: